Your guide to some of the best places to take a staycation drive.

From rugged mountains to picturesque beaches, the UK has an endless supply of stunning scenery that’s just calling out to be explored on a road trip.
The coronavirus pandemic might have put the brakes on your holiday plans, but with restrictions easing, now is the perfect time to get inspired and find out what our country has to offer.

10. Village Hopping in the Cotswolds 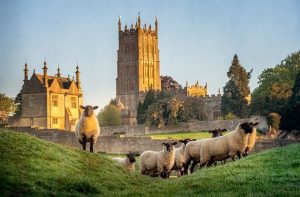 Is there anywhere more quintessentially English than the Cotswolds? Miles and miles of lush countryside are scattered with perfectly-preserved villages and winding country lanes often marked out with iconic Cotswold stone walls.
We recommend starting in Chipping Campden, towards the north of the Cotswolds, before heading south, hopping from pretty village to pretty village as you take in quaint pubs, medieval churches and all manner of local curiosities on your way to Bath at the southern tip.
The region is recognised as an Area of Outstanding Natural Beauty and promises close encounters with wildlife and a host of bird watching opportunities at the Slimbridge Wetland Centre. If you’d prefer a more action-packed escape, paddle boarding, kayaking and archery are all available at the Cotswold Water Park.
Cotswolds road trip stop offs
As well as having one of the UK’s prettiest high streets, Broadway is also home to Broadway Tower, from the top of which you can see a staggering 16 counties.

9. Best of the Norfolk Coast 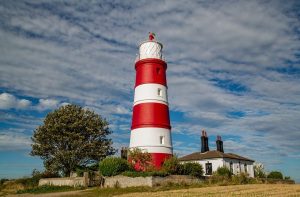 Take in England’s eastern coastline with a drive around tranquil Norfolk. After soaking up the provincial buzz of Norwich (the 11th century cathedral is a must-see), head east into The Broads. With scenic waterways and a rich variety of wildlife, it’s well worth an extra few days lazing around on a boat.
From there, take the coastal roads north towards Cromer, a traditional seaside resort and home to the UK’s only remaining end-of-the-pier variety show. Further along the coast wide, windswept beaches like Brancaster Beach are perfect for an afternoon relaxing by the sea.
North Norfolk is home to more than 40 miles of sandy shores and six Blue Flag beaches, more than any other region in the UK. The golden sands are also enjoyed by the largest seal colony in England at Blakeney Point.
Norfolk road trip stop offs
There are few sights more Instagram-ready than Norfolk’s red and white Happisburgh Lighthouse, so make sure you make the detour. 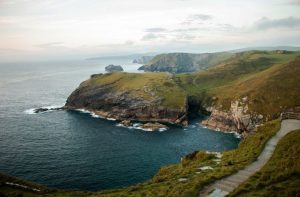 The A39 is one of the longest roads in South West England, connecting Bath to Falmouth. While you can drive the entire road, we’re focusing on a particularly picturesque stretch between Barnstaple in Devon and the popular Cornish seaside resort of Newquay.
While the road itself doesn’t get that close to the coast, you’ll be able to take in plenty of breathtaking views of the Atlantic as you pass through Bude, Camelford and Wadebridge.
The region is perfect for families, with Newquay often voted the nation’s favourite seaside town. Active families will love the walking and cycling trails on North Devon’s suitably-named Adventure Coast.
Devon to Cornwall road trip stop offs
Enjoy a cream tea in Bideford, discover the legend of King Arthur at Tintagel Castle and picnic on Bedruthan Steps Beach, a dramatic stretch of coastline where colossal stacks rise from the waves.

7. Land of the Lakes, Lake District 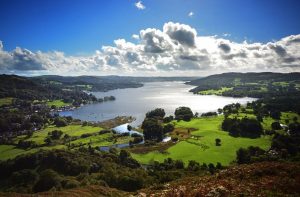 Dive into Wordsworth country with an adventure along some of England’s most picturesque roads. Starting in Kendal, head north into the Lake District National Park towards Windermere, England’s largest lake and a picture-postcard resort that attracts all sorts of visitors.
From Windermere, drive north and drink in the beautiful lakeside villages of Ambleside and Grasmere, the latter home to William Wordsworth’s Dove Cottage and where the poet wrote the famous ‘I Wandered Lonely as a Cloud.’
The calm lakes offer the perfect opportunity to get on the water either by hiring a boat or joining a cruise. If you prefer to stay on dry land the area can be explored by bike or steam train along one of many scenic railway routes.
Lake District road trip stop offs
If you want to learn even more about the UK’s greatest writers, a short detour will take you to Beatrix Potter’s Farm in Near Sawry, the inspiration for Peter Rabbit, Jemima Puddle-Duck and others. 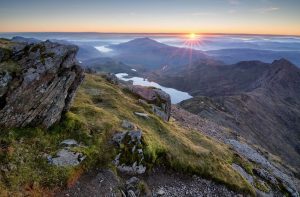 Explore some of the UK’s most breathtaking scenery with a drive through Snowdonia National Park and out across the Menai Strait to Anglesey. Start at Betws-y-Coed and head west past Swallow Falls into the heart of Snowdonia. The A4086 will take you past Snowdon itself, but you may want to stop off and explore the mountain.
Away from the awe-inspiring peaks North Wales is also home to lakes offering exhilarating watersports facilities. Look out for white water kayaking on natural rapids at The National White Water Centre.
Outside the park, take the scenic route on your way across the Strait by swinging through historic Caernarfon first, before heading over the water to explore the beautiful Isle of Anglesey.
Snowdonia road trip stop offs
On the shores of the Menai Strait, Caernarfon is one of North Wales’ smartest towns, and with its stylish waterfront and spectacular castle (a UNESCO World Heritage Site), it’s not to be missed.

5. Best of the Moors, Yorkshire 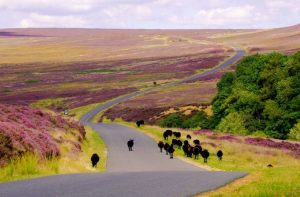 With dense forests, meandering streams and vast swathes of heather moorland, the North York Moors National Park makes for a spectacular road trip. Although the journey from the market town of Helmsley to the seaside village of Staithes is short and sweet, you can stretch it out over a couple of days if you fancy an overnight stay in a village B&B.
Pass moss-covered drystone walls and grazing sheep as you take the A170 towards Pickering and Thornton-le-Dale. Then take the A169 for a scenic journey up to the coast through Goathland and Grosmont.
The Moors are one of the most dog-friendly regions to visit in the UK, with B&Bs, glamping and other accommodation options welcoming furry family members. Whenever your pet wants to explore there are plenty of canine-friendly pubs and beaches available too.
Yorkshire Moors road trip stop offs
Dalby Forest is a great place to stretch your legs or go for a bike ride if you have yours with you. If you stop off in Goathland you can go in search of Mallyan Spout, the tallest waterfall in the Moors. 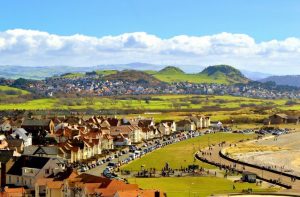 One of the best ways to see Wales is by driving coast to coast. The A470 runs all the way from Cardiff in the south to Conwy in the north, taking in two national parks.
Start in the Welsh capital, then head up through the South Wales Coalfield to the Brecon Beacons. As you reach the heartland of Wales, you’ll pass the gorgeous Llyn Clywedog reservoir and market town of Dolgellau, before heading over the majestic northern mountains of Snowdonia to Conwy.
Jeremy Clarkson fans may recognise the A4069 Black Mountain Pass – the route otherwise known as ‘Top Gear road’ is a favourite with motorists including the outspoken presenter. Those looking for a slice of culture are spoilt for choice with Carreg Cennen Castle and Dinefwr Castle both nearby.
Brecon Beacons road trip stop offs
Wander along the canal in Brecon and enjoy a lazy lunch at a cosy pub in mountainous Betws-y-Coed. 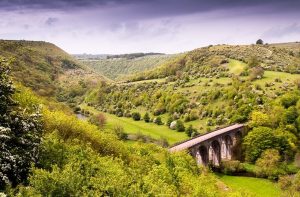 Next up on our list is this tour through one of the country’s most beloved national parks, the Peak District. Start in Glossop, east of Greater Manchester, and head into the Pennines along the famous Snake Pass, one of the UK’s great mountain passes, hitting a high point of 510m above sea level.
From there, head further south towards the reservoirs around the popular Derwent Dam that offer great trekking opportunities. A short detour to the west will take you to the Blue John Cavern, an underground network of caves which offers guided tours – ideal if you feel like an alternative to hill walking on your way ever southwards.
If you want to explore further, the Heights of Abraham in Matlock offers tours to help retrace the footsteps of miners at the Great Masson Cavern. Alternatively, take to the skies in the famous cable car over the Derwent Valley.
Peak District road trip stop offs
Where to start? There are plenty of great attractions in and around the Peak District, from Alton Towers theme park to the neo-Gothic Derwent Dam. 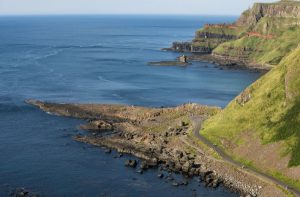 Hugging the Atlantic coast, this jaw-dropping route from Belfast to Derry is steeped in myth and legend. The route is actually made up of nine scenic drives, so you can break it down into smaller journeys and take your time enjoying the sights.
The drive takes you to several of Northern Ireland’s main tourist attractions and landmarks – the Giant’s Causeway itself, Carrick-a-Rede Rope Bridge, Dunluce Castle, Dark Hedges and the Glens of Antrim.
Make the short ferry trip to Rathlin Island from Ballycastle for a tour of the upside down lighthouse built into a cliff face, or sample a piece of history at the Old Bushmills Distillery. The world’s oldest licenced working distillery has been producing Bushmills Irish Whiskey at the site since 1608.
Giant’s Causeway road trip stop offs
Walk along the dramatic Gobbins cliff path and go bird-spotting at the RSPB reserve on Rathlin Island, Northern Ireland’s only inhabited offshore island. 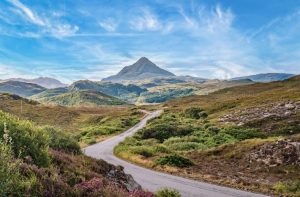 Scotland’s answer to Route 66 boasts some of the most spectacular scenery in the UK, if not the world. It showcases the best of the Highlands, with ancient castles, windswept beaches and historic landmarks lurking around every corner.
The official route starts and ends at Inverness Castle and passes through idyllic towns and villages such as Ullapool, Durness, John O’Groats and Dornoch. It’s advisable to book accommodation in advance as options are limited.
Those looking for adventure can surf the reef breaks of Caithness or head to Corrieshalloch Gorge to try canyoning. The extreme sport combines mountaineering, climbing and diving and tour operators offer safe lessons for beginners.
North Coast 500 road trip stop offs
Bask in the beauty of Achmelvich Bay, a stunning white sandy beach popular with hill walkers and water sports enthusiasts. Further north, spot dolphins and seals off the coast at Chanonry Point.